Are you looking for a quotation that you can't quite place? Trying to track down a hard-to-find publication? Here, folks can help you find the answers, or discuss ways for you to discover them for yourself.

It is an anomaly that Joseph Campbell’s father did not know where the family hailed from in Co.Mayo, Ireland. All that appears to be known is that his grandfather, Charles A. Campbell, arrived in Boston in and around the famine years (1845-52) unfortunately the census in 1841 does not appear to have many entries for Mayo: http://www.census.nationalarchives.ie/pages/1841/. Most may have been burned in the 1921 burning of the Customs House which destroyed many old records.

A two pronged approach though may eventually unravel this mystery:

If for instance we search the manifests of ships sailing into Boston in the period 1848-55 ( http://www.sec.state.ma.us/ArchivesSear ... ifest.aspx ) we find several Charles Campbell’s, three of them from Ireland. The one that catches my eye is the arrival on the ship ‘Eastern City’ 8/23/1853 who is only sixteen (so born circa 1837). At this young age, and having spent his formative years surrounded by hunger, epidemic and eviction it is unlikely he ever bonded with his home area and just wanted to get away. When he arrived in the US he spent 49 years on the Lytham Estate so he must have been a young arrival. His most likely port of departure would have been either Westport, Ballina, Killala or Sligo.

The other approach, and I suspect the information is not available on-line yet, is to check the parish registers in Mayo for births during this period. That we have the middle initial ‘A’ should help pin down in what parish Charles A.Campbell was born. With the interactive map, http://registers.nli.ie/parishes/0748 , it is possible to zoom in and discover the name of all the different parishes; entering the name of the parish in the search box will bring up the births registered for that parish. This is an ongoing process so it may be years before the birth registers for all the parishes are on-line. We have too a good starting point in the distribution map for Campbell's in Co.Mayo in 1850 which indicates a significant, westernmost, red cluster, denoting essentially the barony of Erris, home to some of the wildest and starkest scenery in Ireland. Less dramatically there is also a small purple cluster near to modern day Swinford (sample of births 1841-1850)otherwise the Campbell's appear to have been thin on the ground in Mayo. 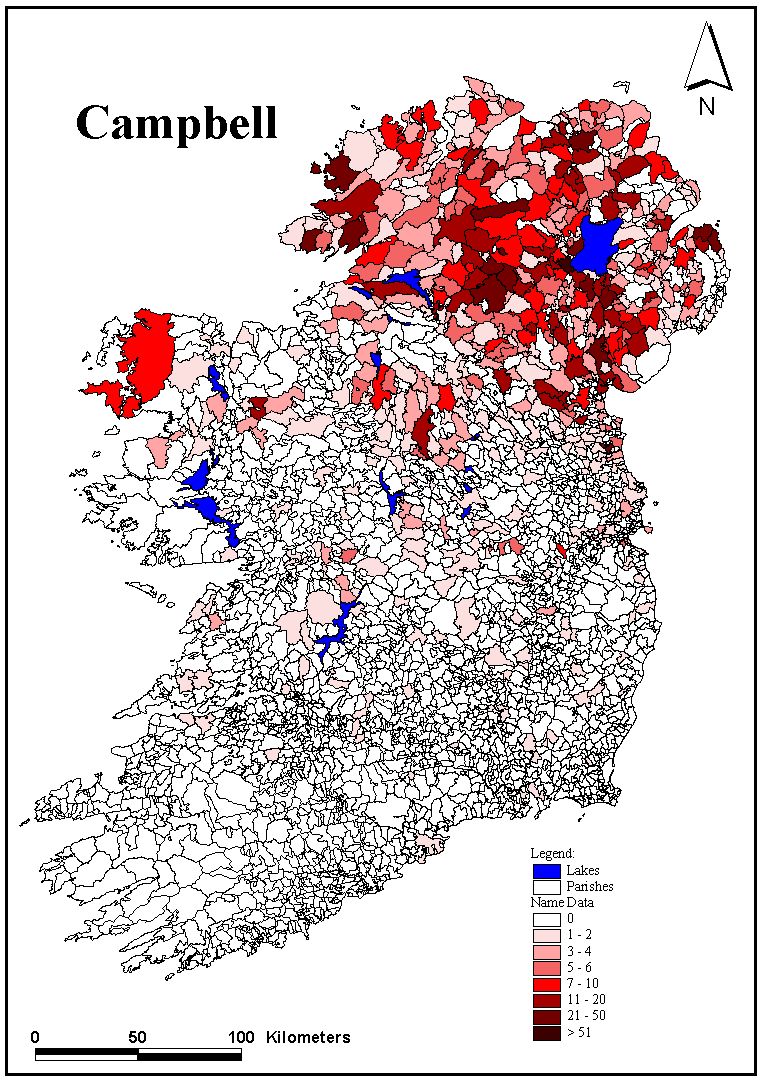 Even so further back in history it is unlikely the Campbell's were in Mayo, the homeland of the MacCathmhaoil, is around Clogher in County Tyrone (note cluster of dark purple in the above map for this area) where they came to rest about 1185AD.
It seems unlikely Campbell's paternal line is descended from the better known, but from the off , staunchly protestant, Scottish Clan Campbell.
The same information in more precise form for the Campbells can also be seen at Griffiths Valuations finished 13 July 1857 for Mayo (subscription access only after a few clicks).

Note: the Campbell's indicated in the 1659 map on the otherhand I think are from Clan Campbell but this appears to be before the MacCathmhaoil name mutated into Campbell, McCaul, etc as evidenced by their limited distribution. One reason for the conflation is that when pronounced by an Irish speaker 'Cathmhaoil' and 'Campbell' are very similar.

Also the databases of landowners for 1641 and 1670 show only a few entries respectively for Campbells and it is noteworthy that the first names Charles or Joseph do not figure among the names used although it must be admitted that these first names are not common among the McCaul/Cathmhaoil/Campbells either.
Tony D.
Fare Forward
Top
Locked
1 post • Page 1 of 1

Return to “The Wisdom Pool: The Associates Research Dialogue”